Subscribe to get the Good Morning, CNY newsletter (brought to you by Kinney Drugs) delivered to your email inbox weekday mornings.

Photo of the Day

Speaker of the House Nancy Pelosi, D-Calif., leads the final vote of the impeachment of President Donald Trump, for his role in inciting an angry mob to storm the Congress last week, at the Capitol in Washington, Wednesday, Jan. 13, 2021. (AP Photo/J. Scott Applewhite)AP

House impeaches Trump for second time: President Donald Trump was impeached by the U.S. House for a historic second time Wednesday, charged with “incitement of insurrection” over the deadly mob siege of the Capitol in a swift and stunning collapse of his final days in office.

Katko one of a handful from GOP to vote for impeachment: Rep. John Katko, R-Camillus, was one of 10 House Republicans who broke ranks to vote with a unanimous House Democratic conference to pass a resolution impeaching President Trump. He was the only New York Republican House member to vote for the impeachment resolution.

Schumer “glad” Trump was impeached: “We all know who caused this”

Capitol has look of armed encampment: Inside the House chamber, the nation’s lawmakers spoke with solemnity about democracy and the rule of law. But only steps away, outside the chamber doors, there was the look of an armed encampment. Where visitors once walked, hundreds of National Guard members camped out, protecting lawmakers still reeling from last week’s violence.

How games are putting people to work: TCGplayer, the company that took the trading card market online, is rapidly expanding its footprint and hiring in downtown Syracuse, thanks in large part to the coronavirus pandemic’s positive impact on the gaming industry. Founder and CEO Chedy Hampson said the company, which has added nearly 100 jobs in the last year, has 50 open positions “with many, many more coming.”

How long before there’s a winner in the Brindisi-Tenney race? The 700,000 people who live in New York’s 22nd Congressional District should prepare to be without a representative in Washington for the foreseeable future as an epic battle unfolds for the undecided House election. The post-election dispute between Anthony Brindisi and Claudia Tenney is likely to go on for months, history suggests.

Covid cooking: Trying to replicate Funk ‘n Waffles at home: During the Covid-19 shutdown, we’ve been recreating our favorite Syracuse restaurant dishes at home. This month, we tackled two waffles from the beloved waffle joint, Funk ‘n Waffles – the Chicken & Waffles plate and the famous Jive Turkey. How did they turn out? Not bad, but not nearly as funky as the originals. Watch the video. 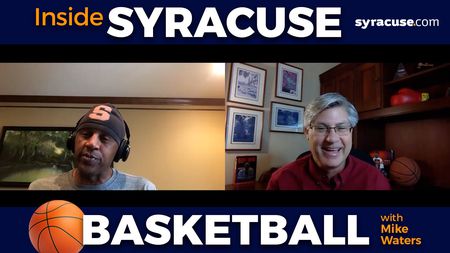 ANOTHER SU LEGEND VISITS THE PODCAST: Rafael Addison joined Syracuse.com reporter Mike Waters on the Inside Syracuse Basketball podcast and shared stories of how he was recruited to Syracuse, his memories of former teammate and longtime friend Pearl Washington and his experiences as a rookie on a Phoenix Suns team with veteran players doing cocaine. Listen and subscribe to the podcast. (Video screenshot)

“The window is closing rapidly”: With time quickly running out on the possibility of even the briefest of high school winter sports seasons, Section III athletic officials are still holding off on canceling wrestling, hockey and basketball – categorized by the state department of health as high risk for the spread of the coronavirus.

Muddled in the middle: Bourama Sidibe, Syracuse’s senior center who injured his knee on Nov. 27, was said to be a game-time decision Tuesday against North Carolina. He never donned his uniform. “He’s not playing,” SU coach Jim Boeheim said. “He cannot play.” With Sidibe sidelined, what is Syracuse’s center situation?

Georgetown cancels game due to virus issue; will it impact SU?

Review of “The Ultimate Playlist of Noise,” latest movie shot in Syracuse

Learn a skill, Symphoria, join an Owl Prowl: 12 things to do in CNY

To listen to the latest news every morning with Alexa, please click here.

The place did the pandemic begin? WHO group arrives in Wuhan to analyze COVID’s origins - syracuse.com

31 folks have been murdered in Syracuse in 2020: Listed below are the victims - syracuse.com