Syracuse native Johnathan Worden started writing a book about his dog Moose during the pandemic, just for fun.

After being furloughed from his job in the health care industry, his husband suggested finishing the story in his free time.

“Really, it was a bucket list item,” said Worden, who now lives in Buffalo, N.Y. “I was doing it as a gift for my family and friends.”

As Worden researched book-binding websites, he stumbled upon a video showing how to self-publish a book. He connected with an illustrator on the freelance app Fiverr, and self-published his book in February.

Worden’s book “The Great Dane Chronicles: Mr. Moose Caboose Finds His Way” follows the journey of Moose, a Great Dane who has an identity crisis because he’s bigger than other dogs, and his coat makes him look like a cow.

Worden put the book up for sale on Amazon on a whim.

A month later, his book sold 600 copies. It was a surprise success. Two Buffalo bookstores now carry the book, and Worden is closing a deal to sell it in a Minnesota airport. In the past month, he started doing TV interviews and virtual book readings through hospitals.

But the celebration was short-lived.

Right around the time Worden released the book, Moose started to limp. He thought it might be a paw injury, but the limp kept getting worse.

“This dog has been around for 11 years and never had anything wrong with him, and now he’s limping every day,” Worden said.

The vet brought Moose in for an X-ray and found an aggressive cancerous tumor in his leg. Moose only had about three weeks to live. The cancer was growing out of Moose’s bone and starting to swell.

While Worden was talking about his dog on the local media circuit, he watched a rapid decline in Moose’s health.

“It was emotional because we were celebrating (the book) but we were also gutted and torn apart that he was leaving us,” Worden said.

Three weeks later, they had to let Moose go. 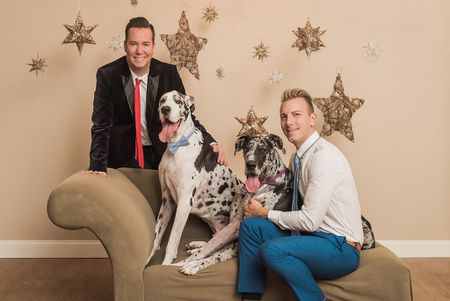 Worden plans to keep Moose’s legacy alive in “The Great Dane Chronicles” series. He donated 10 percent of his first book’s sales to the emergency fund of the Buffalo veterinary hospital that helped Moose during his final weeks. And he has another book on the way.

“This all comes from my love for Moose,” Worden said. “He was very, very much connected to me. That dog taught me so much about being responsible and selfless. I grew a lot because of Moose.”

Worden says he’s been inundated with responses from parents sending him photos or videos of their kids reading the book.

“There’s books out there about bullying, inclusion or belonging, but so many are through the lens of the child or parent teaching a lesson,” Worden said. “Mine are done through the animals. The connection is through the pet…learning to be ‘comfortable in your own fur.’ Kids get it.”

His next book in the series will release this summer, of Moose helping a lavender goose become comfortable in her own feathers.

Worden was born and raised in Syracuse. He lived for a few years in Canastota before his family moved to DeRuyter, N.Y., where he attended high school. When the pandemic is over, Worden plans to bring his book tour through Syracuse.

• What you need to get Covid-19 vaccine appointment

After 77 years in a household, Syracuse's oldest fish roast is closing - syracuse.com

Ask Amy: The Finest Manner To Discover A Lady Is To Cease Trying – syracuse.com