Syracuse, N.Y. — Tuesday was just what the doctor ordered for the Syracuse University men’s basketball team.

As it turns out, some recent struggles by two of its best players can be explained, in part, by a doctor.

Syracuse defeated Miami 83-57 on Tuesday night at the Carrier Dome, using a 23-3 surge in the first half to take the lead and never look back. SU improved to 8-4 overall and 2-3 in ACC play.

Fans who have been pounding Twitter and sports-talk radio begging Syracuse head coach Jim Boeheim to play freshman guard Kadary Richmond and sophomore center Jesse Edwards more got their wish. Both Edwards and Richmond made a huge impact for the Orange in the blowout win.

Tuesday was a “get right” game for Syracuse. The Orange had to win just to get that winning feeling back in its blood after losing three of the last four.

The Orange got stellar play from its struggling backcourt, two key reserves and was vastly improved on defense.

A win over Miami won’t help SU’s NCAA Tournament resume, but plenty of chances loom, starting with a game against Virginia Tech on Saturday at the Dome.

Backcourt’s Back, All Right!

The Syracuse backcourt came roaring back against the Hurricanes after a series of down performances in SU’s previous four games.

As it turns out, there is a direct line to draw to those troubles considering Covid-19 hit Syracuse harder than previously thought, but more on that in a minute.

Joe Girard III and Buddy Boeheim combined for 46 points against Miami, with both netting 23 points.

Girard shot 8-of-15 against Miami, including 5-of-9 from beyond the arc. It was a badly needed turnaround for JGIII, who combined to score eight points in SU’s prior two games. Zoom out to SU’s last four games, Girard had averaged just 8.5 points and shot 11-for-33 from the field.

Girard played loose, free and confident at the two-guard with Kadary Richmond running the show at point. He was taking shots from all over the court with precision. He simply had a look and swagger not seen all season.

Boeheim’s 23 points came on a 9-of-16 shooting mark, 4-8 from 3-point range. Boeheim played a lot of small forward in his 35 minutes against the Hurricanes with Richmond and Girard serving as the backcourt.

Boeheim also badly needed a bounce-back performance from long range. He had made just nine of 33 shots from beyond the arc in SU’s prior four games.

“This is the best they’ve both played all year,’’ Jim Boeheim said.

As it turns out, both Boeheim and Girard were sick with Covid-19 during’s SU’s recent 18-day pause, which started after University of Buffalo players tested positive for Covid following Syracuse’s game against the Bulls on Dec. 19.

“Everybody knows they were (sick), but then they expect them to come back and play like nothing ever happened. It just doesn’t work that way,” Jim Boeheim said.

“Buddy and I both don’t like making excuses,’’ Girard said. “We like competing. I don’t want to speak for him, but to be honest, I think I’d be lying if we haven’t progressively been feeling better. You’ve just got to be patient and stay positive. Obviously, we’re feeling better as time goes on.’’ 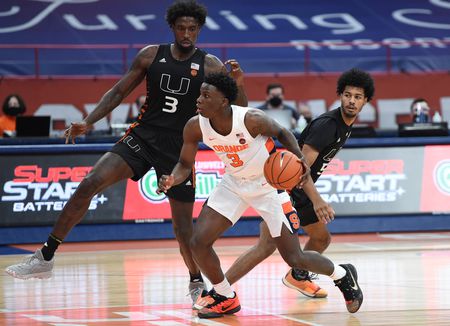 Kadary Richmond changed the dynamic of the game and energized the Orange when he came in at point guard early in the first half.

Richmond dished out a career-best eight assists against Miami. He also scored seven points and had five steals, matching the mark he posted against Rutgers earlier this season.

Richmond brought a rare sight to the point guard position this season as he was a true facilitator. He made several sharp dishes inside to Guerrier and Jesse Edwards. He found Girard and Boeheim in stride. When the pass wasn’t there, he found daylight in the paint. Richmond simply knows how to get to the rim.

Richmond was great in the zone, combining his long arms with an understanding of where to be and anticipating plays to create offensive breaks the other way.

“Kadary made some really good passes,” Boeheim said. “His defense was exceptional. He’s long. He anticipates well. He’s just a natural. He’s fit in. He’s got a real good instinct for the game.”

While other ACC opponents may provide more of a challenge, Richmond’s game against Miami was a perfect template of what he can bring to the table. Play him for 20 minutes and good things will happen. 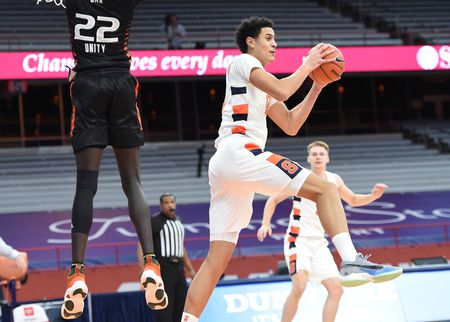 Richmond’s run against Miami was impressive, but the energy and dynamic that Jesse Edwards brought off the bench was equally as important.

Boeheim was forced to put Edwards in the game when Marek Dolezaj picked up two early fouls. The Orange coach had said that Edwards “wasn’t ready” when asked about his prior absences in games.

He was certainly ready to help SU on Tuesday night and seized the opportunity.

Edwards grabbed a career-high six rebounds, a big help to a team that has struggled in that department. His previous high (five rebounds) came against Bucknell last season. His 21 minutes played represented his highest total at Syracuse. Edwards also scored a season-high seven points.

Edwards brought a presence into the middle of the zone, something lacking for Syracuse for most of the year with Bourama Sidibe injured. He shut off Miami’s Anthony Walker, who was gaining steam with an early scoring spurt, and used his 6-11 frame to alter shots and divert Miami out of the paint.

On offense, he dunked the ball and played sharply on the pick-and-roll. He is working on his handle but always has his hands up and ready to score quickly if the ball comes his way.

“With Marek (Dolezaj) in foul trouble, Jesse (Edwards) was monstrous for us,” said Boeheim. “He did a great job in the middle. He still has a long way to go, but he rebounded it and he was a presence out there.

“He showed a lot of promise tonight. This was by far the best that he’s played here.”

Edwards is still developing, and Syracuse fans need to be patient with that. He may not play 20 minutes a game against more physical teams. But all fans were asking for was to give Edwards a chance to prove his can contribute and provide some relief for Dolezaj.

Edwards got that chance against Miami and will get more in the near future to prove Tuesday night wasn’t a fluke. 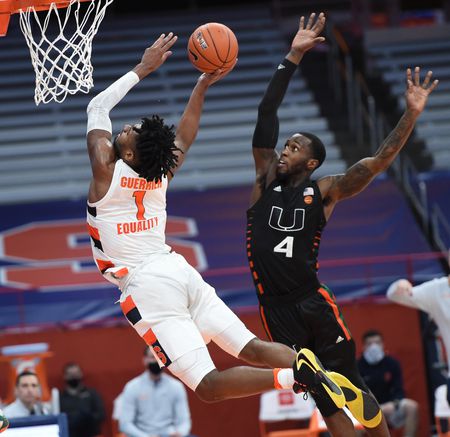 Quincy Guerrier stayed on the first-team All-ACC track with an 18-point, eight-rebound night against the Hurricanes.

The Orange sophomore forward was 8-of-10 from the field with lots of close looks at the basket. Several of Richmond’s sharp passes found Guerrier underneath for easy scores.

Guerrier is averaging 19.7 points and 10 rebounds per game in SU’s last three contests. Two of those three games were losses.

Tuesday night’s game showed what can happen when Guerrier gets help on the offensive end and doesn’t have to carry the load, not that opposing teams have had much luck stopping him anyway. 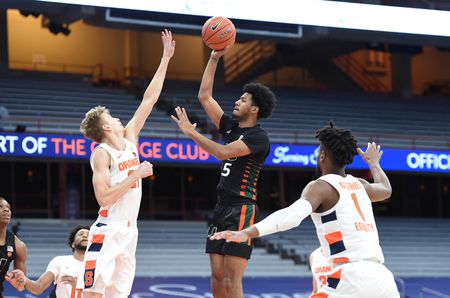 Miami (Fl) Hurricanes guard Harlond Beverly (5) shoots in the lane in a game between Syracuse and Miami at the Carrier Dome Jan. 19, 2021. Dennis Nett | dnett@syracuse.com

This one comes with a bit of a disclaimer.

Make no mistake, Miami had enough self-inflicted wounds on offense to help SU’s cause on defense. The Hurricanes shot 22-of-56 (39.3 percent) and missed a ton of open looks. The Hurricanes were awful from 3-point range, shooting 4-of-25 (16 percent) overall with an 0-for-11 mark in the first half.

That said, Syracuse had something to do with Miami’s offensive woes with better movement in the zone and a presence at center in Edwards that caused 17 turnovers. The Orange took full advantage of that, cashing in 27 points off those miscues. SU had 11 steals against Miami.

Syracuse will take it any way it can get it these days. Beggars can’t be choosers when the Orange gave up 64 second-half points to Pittsburgh, prompting the head coach to call it one the worst defensive performances he had ever seen. 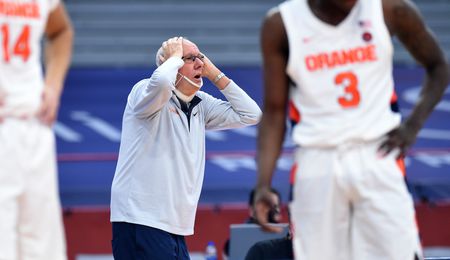 Syracuse head coach Jim Boeheim yells for a call in a game between Syracuse and Miami at the Carrier Dome Jan. 19, 2021. Dennis Nett | dnett@syracuse.com

Alan Griffin took a step back against Miami after a career performance against Pitt.

Griffin, who scored 28 points against the Panthers, put up just five points in 16 minutes on 1-of-5 shooting against the Hurricanes.

Griffin fired up two early airballs and had a turnover against the Hurricanes.

Boeheim had seen enough. Griffin was pulled for much of the first half and played just 16 minutes against Miami.

If anything, the play of Boeheim, Girard and Richmond together, along with Edwards’ breakout, took a lot of pressure off Griffin to carry a heavy load against Miami. 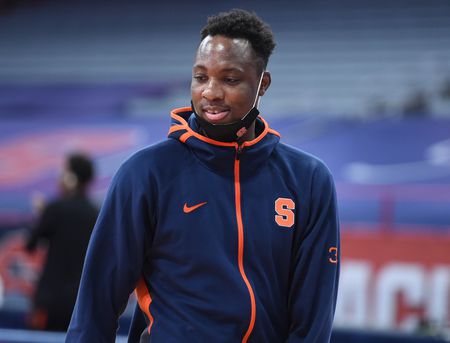 Bourama Sidibe had a light workout before Tuesday’s game but did not play.

His return to the court from a knee injury continues to be a mystery. Boeheim said Sidibe has not practiced and he doesn’t expect him to practice. He’s out indefinitely.

You have to wonder if we have seen the last of Sidibe in the lineup this season. That would be bad news for an Orange team that badly needs consistent paint players.

Edwards’ play was encouraging and it took pressure off Marek Dolezaj, who didn’t score and had just four rebounds against Miami playing some at forward, but Sidibe has always been the best option at that spot, when healthy of course.

This, That and the Other Thing 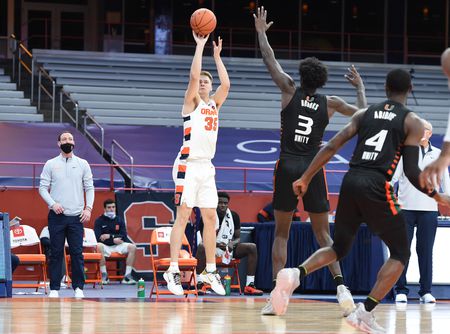 Syracuse Orange guard Buddy Boeheim (35) in a game between Syracuse and Miami at the Carrier Dome Jan. 19, 2021. Dennis Nett | dnett@syracuse.com

Syracuse leads the all-time series 20-9, including a 6-4 series edge in ACC play.The Hurricanes’ 3-point field goal percentage (.160) was the lowest by an Orange opponent since St. Bonaventure shot .158 on December 29, 2018.Buddy Boeheim scored his 300th career field goal on a midrange jumper in the second half. He also played his 2,000th career minute during the game and matched his season-best with four triples.

Dabbundo: Syracuse should not be enjoying video games towards Liberty – The Day by day Orange